The housing market in the GTA showed a sales growth of 22 per cent year-over-year, in September. Much of this growth came from a sharp rebound in sales of detached homes, which were up by 29 per cent versus September 2018. However, the Toronto Real Estate Board (TREB) notes that sales with 7,825 transactions remain below the record September 2016 peak of more than 9,800 sales. And the continued low supply remains a concern, as September listings were down by 1.9 per cent year-over-year.

The dearth of supply continues to drive tight market conditions and an accelerating rate of price growth. The average sales price for all types of homes including condos in the GTA hit $843,115 in September, which is the highest average monthly sale price increase since May 2017. In Toronto, the average price reached $1.36 million, and in the 905 areas, the average price hit $946,256.

The townhouse segment of the GTA market saw the biggest price gain at 6.8 per cent with an average price of $677,387. Condo prices were also up 4.2 per cent at an average sale price of $595,013. In the 905 areas, condo prices rose 9.2 per cent to $497,403 on average."This points to the need for greater diversity of housing types to bridge the gap between detached houses and condominium apartments," explains TREB chief market analyst Jason Mercer.

On other fronts affecting the housing market, homebuyers should be encouraged that the Bank of Canada has maintained its key interest rate at relatively low levels. According to the Federal Bank, Canadian wages are up, and “housing activity has regained strength more quickly than expected as resales and housing starts catch up to underlying demand, supported by lower mortgage rates.”

“Statistics Canada’s most recent national population estimate represented the highest twelve month population increase ever recorded. This growth was driven by immigration, of which the GTA was likely a key beneficiary due to its strong regional economy and diversity. As a result, the demand for all types of housing in the GTA – rental and ownership – will remain strong. This fact underpins the need for immediate and sustained action on housing supply,” says TREB CEO John DiMichele. 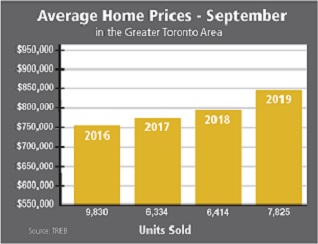